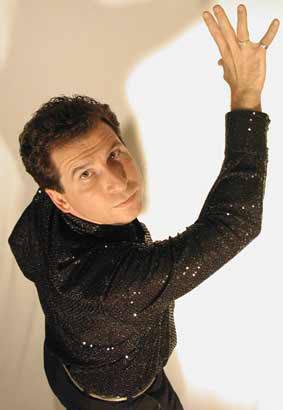 A HILARIOUS HYPNOTIC EVENT
The Incredible BORIS is a versatile performer. His unique style, charisma and powerful stage presence transforms any event into an extraordinary experience. Audiences are laughing hysterically while being amazed by this fantastic demonstration of mind control.
AUDIENCE PARTICIPATION AND HYPNOSIS
The show is a fast pace musical adventure. Everyone gets involved. Audience members venture into a world of wonders, whose boundaries are only that of imagination. Anything Boris suggests becomes a reality. People travel to distant places, become celebrities, impersonate cartoon characters, or become "Chip".
It is a superb performance filled with intrigue and laughter.
SUITABLE FOR ALL AUDIENCES
The performance never oversteps the boundaries of good taste ensuring that the audience laughs with the participants, not at them.
CONVINCES SKEPTICS
The demonstrations are phenomenal. Even the hard-core skeptics walk away believing the impossible, thoroughly convinced. Boris acknowledges skeptics, because at one point, he was one.
WORLD OF WONDERS
The Incredible BORIS is dazzling audiences across United States, Canada, and as far away as the Caribbean, Hawaii, Japan, Korea and Russia. He is a favorite on cruise ships. His fascinating show is a guaranteed success, always resulting in a return engagement.
The Incredible BORIS is everything his name suggests. He proves it in his live performances and numerous radio and television appearances.
EXPERT
The Incredible Boris is an expert in psychology, hypnosis, body language, power of suggestion and human behavior. Boris is a regular speaker and performer, presenting his hypnosis show for most fortune 500 companies and their competitors, appearing in almost 300 live performance engagements yearly. He is a frequent talk show guest and delivers a comical point of view to an otherwise serious subject of human behavior and expression. He is a wordsmith comedian, observer and commentator on society quirks, obsessions and stereotypes. Incredible Boris is not just a stage name, but also a way to describe a positive attitude and a constant state of mind. Boris has been the featured guest on numerous television programs, including Montel, Howie Mandel Show among many others and at the prestigious Just for Laughs Festival in Montreal.
FIND OUT WHY, LONG AFTER THE SHOW, PEOPLE STILL TALK ABOUT IT...