Souled Out is a nine piece musical ensemble that specializes in the great "Motown" soul sound. Featuring a three piece vocal section that fronts the band, the group weaves it's way through the Motown and 70's & 80's soul eras with choreographed dance routines and outstanding musicianship. Therefore, not only is Souled Out a sensational listening and dancing experience, it is an awesome visual one as well.

Founded in 1997, the band has wowed audiences from Atlantic City to Las Vegas and throughout the North East, including New York City, The Pocono's Resorts in Pennsylvania and the New York State Fair to name just a few. The band has also won a number of music awards and has been honored for their charitable work within the Hartford, CT and Springfield, MA area which they call home.


Video Clips
Live at the Company Theater in Norwell, MA
- Can't Get Next To You
- Imagination
- Love Train
- My Girl
- It's A Shame
- Since I Lost My Baby
- Sweet Soul Music
- That's The Way Of The World 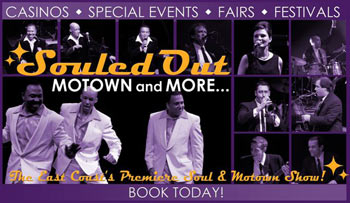 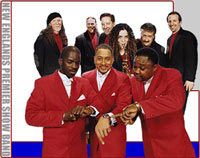