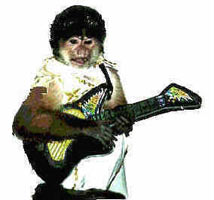 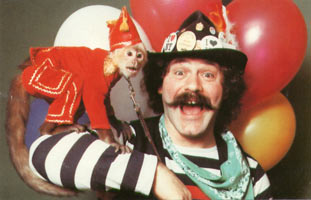 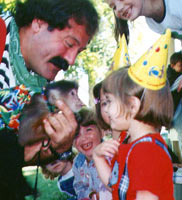 A Brief History of Organ Grinding:
The Organ Grinder originated in Egypt 5 centuries ago. Later he made his way to Europe as a man with an out of tune organ who cranked one single song over and over until people paid him to take his melody elsewhere. Eventually, the Organ Grinder evolved and moved across the ocean to America. The Organ Grinding tradition in the United States dates back to 1864 in Boston's Old Back Bay. The Organ Grinder started here as a street performer who cranked a hand organ or "hurdy gurdy" and had a monkey who did tricks and collected coins from passers-by. As this tradition dwindled in the 20th Century, Organ Grinding became a lost art.

About Hurdy Gurdy Monkey and Me:
Our History:
Established in 1980, Hurdy Gurdy Monkey and Me started out as a man, a monkey and a dream...ok ok, it wasn't that dramatic - but close...Tony joined forces with Hurdy Gurdy Monkey after studying the lost art of Old Fashioned Organ Grinding. Coco the monkey, (Tony's famous better half), has been with Tony for 24 amazing years. Tony raised her since she was a baby, creating his own special variety of reward training system. Coco and Tony have a special bond that radiates whenever they perform. Tony has crafted a unique and original brand of entertainment that is unparalleled in the world of children's entertainers. Currently, Tony and Coco are one of only two organ grinder and monkey teams left on the east coast and one of only three teams in the U.S., preserving this 140 year old entertainment tradition.

New England's only live performing monkey act has been featured on many television programs including: Late Night with David Letterman, Saturday Night Live, Chronicle, and NBC's The Today Show. Tony and Coco have also been featured in the made for TV movie The Kennedy's and the Fitzgerald's and have received the prestigious comedic honor of a lifetime membership to the Harvard Lampoon.

Our Show:
This New England based Organ Grinder and Monkey act is an original and modern version of an age old historical treat, pleasing kids of all ages and adults alike! Full of high intensity action, the show is a guaranteed hit featuring the monkeyshines of Coco, the live performing monkey and the tomfoolery of her sidekick Tony, the Hurdy Gurdy man. Coco's repertoire of tricks include:

The mystifying shell game where you'll get a chance to test your wits against the monkey's! (Trust us, you'll be surprised who wins!)

The bing bang boom shot where Coco jams and slams her basketball into the hoop with the grace and style of an NBA pro!

Coco plays catch - donning her big league baseball cap Coco catches every ball thrown her way and returns it back in rapid fire!

What Clients Have to Say:
Below are some comments emailed to us by Hurdy Gurdy Customers!

Elaine from Ipswich writes:
"Tony and Coco came to my daughter Emily's 6th birthday party. They were such a hit! I knew the kids would enjoy them but I had no idea how excited the adults would be too! Tony and Coco relate to everyone and the show was really funny. My favorite part was when Coco dressed up like Elvis!"

Kathleen from Boston writes:
"My company hires Tony every year for our Holiday party. He is the always a big hit and every year people ask if he is coming back again. The answer is always YES!"

Dan from Brookline writes:
"I first met Tony and Coco when my son and I went to a neighbor's bar mitzvah. It was all my son could talk about for months so as a member of my son's schools PTA I suggested Tony for a school event. The kids and teachers laughed from the minute Tony started the show until the very end, (especially when Coco put on her Red Sox gear to play catch with the kids). Tony is really funny and great with the kids. He was by far the best entertainer I have ever seen and I would highly recommend him to anyone!"