WHEN YOU REALLY WANT TO PARTY 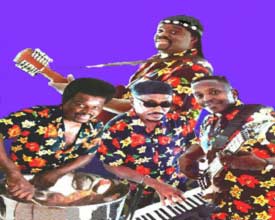 The I-Land Rokkerz is a Multi-Cultural music experience you will never forget. The group performs an exciting mixture of Caribbean, Latin, and R&B dance music that keeps the house rocking from start to finish.

Formed in 1991 by lead vocalist, guitarist, and steel drum player, Lawrence Sterling. A veteran musician and show person who has performed styles of music from "Heavy Funk" to "New Age Jazz". Other members of the band are EDDY TUMAH (bass guitar), DAVID ERNEST (drums & percussion), and JORGE GARCIA (keyboards & vocals).

A favorite at Yacht Clubs, College Events, and Corporate Theme Parties. This band has toured throughout the Northeast -USA and Canada.

So..., throw a party that will transfer you to a cruise ship in the "Caribbean Ocean" think..."I-Land Rokkerz".

At the age of fourteen, Larry began performing with his brothers and sisters in "The Stringfield Family Band" for private parties, high school dances, and proms throughout Western Pennsylvania. They toured as an opening act for "Three Dogs Night" concerts and in 1969 toured with the Temptations, The Young Rascals, and Hoyt Acton.

Larry relocated to Memphis and worked for STAX Records as a studio musician, recorded guitar tracks for Isaac Hayes, Al Green, Sam & Dave, The Bar-Kays, and various other artists on the STAX Record label.

Larry then moved to NEW YORK, reformed "The Stringfield Family Band" and did studio session work at "ELECTRIC-LADY-LAND" Studios in Greenwich Village. The band performed at Glen Island Casino, Trudy Hellers and the Apollo Theater, and other Manhattan night spots. When Larry next moved to Boston, he played numerous night clubs through out New England.