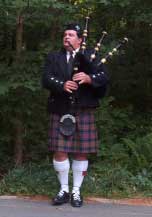 Here's what our Bagpiper Ian has to say about his experience as a Bagpiper; Over the years, I have played at a great many events of every imaginable kind, from very elegant and traditional to very avant-garde and informal. I've played in cathedrals and historic churches, and I've played on town commons, on the beach, and even in the woods. I've done simple things, such as playing a few tunes outside at cocktail receptions, and I've done much more elaborate things, such as playing large receptions in four-star hotels, or providing all of the music played during wedding ceremonies (including helping couples plan how to make everything work together musically).

My background as a piper has been as an active player on the highly demanding competition pipe band circuit. I played with the Worcester Kiltie Band from 1993 to 1995. From 1995 through the present, I was a founding member, Pipe Sergeant (1999, 2000), and one of the principal players in Tulach Ard Pipe Band, out of Lexington, Massachusetts. Both the Worcester Kiltie Band and Tulach Ard Pipe Band are established, respected pipe bands at one of the highest competition levels in the United States (Grade 2), and have competed successfully in pipe band contests all the way from Maryland to Canada. There are only a handful of Grade 2 pipe bands in the United States, and only a select group of pipers are accomplished enough to play in them.