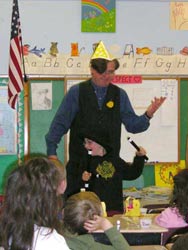 The Danny Hustle show has to be seen to be appreciated.Non-stop comedy and amazement will entertain your guests at any venue. Street fairs, birthday partys, corporate events, or fund raisers can all benefit from live entertainment.

In Danny's show things will vanish and appear out of thin air! Someone from your audience will read Danny's mind or might even be cut in half! Audience participation lets everyone in on the fun. In Danny's show audience members are made to feel like the stars of the show.

What are people saying about The Danny Hustle Show?

"Danny's show is the perfect combination of comedy and magic for all ages. I was truly impressed by his ability to incorporate my son's birthday theme, SpongeBob Squarepants, into the magic. At one point in the show, he pulled a pair of SpongeBob boxers out of a Tiki Head! Our family and friends agreed that his act was the highlight of the party. In fact, we liked it so much, my family went and caught his Faneuil Hall act a week later!" - Amy Pierce

Children's Entertainment: Danny has been a children's entertainer for almost 30 years. His enthusiasm and ability to create fun makes him a favorite with children of all ages. From school events to birthday parties, everyone has a ball. There is much interactive magic, and everyone is involved in the show! Book Danny today, for you next event. LET THE FUN BEGIN!

Street Theater: In 2000, Danny discovered the fantastic world of street theater and began performing regularly in Harvard Square. Today, he performs regularly at Market Place Center, near historic Faneuil Hall, performing several shows during the day to enthusiastic audiences. This type of show is fantastic for out-door corporate events, street fairs, and grand openings. As you can see in the photograph, Danny has no problem drawing a crowd! 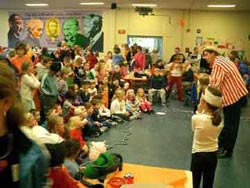 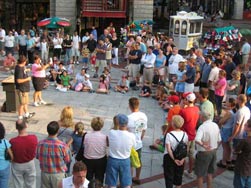 Stephanie,
I just wanted to drop you a note to say thank you. Danny Hustle was very good and the kids loved him. He was very patient and made sure all of the kids had balloons His show was also perfect for the 7 year old crowd. The adults even enjoyed the shop. I would definitely use you folks in the future. Thanks,
Joel Edelstein