Here's the deal folks....Boston Party Makers saw this Chicago Band at an event and they were simply the single best Cover/Party Band we've EVER seen! 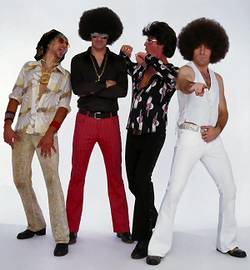 Not just a dance band, but an energetic, high energy show exploding with funky costumes, style and attitude that leaves audiences astonished and overwhelmed!

The "Afros" are far from the typical dance band. Their electrifying show propels you into the groove, complete with the style costumes and dance moves of the 70's. They add a unique dimension to their performance, demonstrating the common ties between 70 s Disco and today s popular music. Along with their brothers in Los Angeles, the Boogie Knights, their professional, energetic, humorous and magnetic style has defined them as America's #1 Disco Tribute.

They have shared the stage with artist such as Lionel Ritchie, KC and the Sunshine Band, Kool and the Gang and have appeared on national shows as Jenny Jones and Mancow.

When you choose The Afrodisiacs you set the stage for your event to be one of the most memorable your guest will ever attend. They are available for all type of parties and private events, from birthdays and weddings to large corporate events. Always count on the "Afros" to deliver the goods for any special event that requires professional, high-impact entertainment.